END_OF_DOCUMENT_TOKEN_TO_BE_REPLACED

Jozy Altidore’s move from Major League Soccer to Europe looked like a bust a few months ago. The former New York Red Bulls forward moved to La Liga side Villareal on June 4, 2008 for $10 million, making him the most expensive American player ever bought from Major League Soccer, surpassing the $4 million Fulham paid for Clint Dempsey. He was just 18 years old then. The world looked like it was at his feet.

END_OF_DOCUMENT_TOKEN_TO_BE_REPLACED

Manchester United’s completely unpredictable 1-0 win over Liverpool – sorry Kevin – and Spurs’ similarly shocking triumph over mighty Charlton were FA Cup fixtures reminding us of how dire the competition can be, but there were a couple of real surprises this weekend in the oldest cup tournament in the world.

While it’s not, you know, outside the realm of possibility for Arsenal to be stumped by lower-level opposition who outwork it and close down aggressively, the Gunners have been on a roll of late, after an important win over Chelsea and a disappointing draw with Manchester City that they nonetheless dominated utterly. However, Leeds led for much of the second half and were denied the win only by a very late penalty from Fabregas.

Anytime the lower-league club pulls it out over a top-flight competitor – particularly one whose team cost approximately 963 times more than the opposition – it’s fun to watch. And, somewhat surprisingly for a game involving Manchester City, it actually was a good one to watch, as Leicester leapt on City’s pallid defense, scoring in the first minute and pulling level again midway through the second half. For a team full of wildly expensive defenders and defensive midfielders, City really was shocking at the back and could easily have lost.

END_OF_DOCUMENT_TOKEN_TO_BE_REPLACED

Messi: Master of the Chip

Lionel Messi has scored 16 goals in 14 appearances for Barcelona in all competitions this year. He's also chipped in four assists. (Courtesy Nicholas Macgowan)

Lionel Messi scores goals, that’s a given by now. He scores lots of goals, some more beautiful than others. But, have the fans and pundits become a little jaded? Is Messi really that good of a goal scorer and are all of his goals “beautiful”? Well, no, but many of them are.

Messi makes fans and pundits around the world sit and scratch their heads and say, “how did he do that?” on a regular basis. The Argentine does things that just don’t happen on the field and most players wouldn’t dare try some of the shots or moves he attempts while running at defenders. That’s what makes him stand out.

He is skilled enough and a good enough player to try and chip a goalkeeper on a regular basis. Not because it’s flashy to chip a goalkeeper. Nope. Just because he knows it’s the most effective way to score at that given moment in the game.

And Messi is probably the only player playing, right now, who dares to do some of the things he does. To top it off, he makes it look easy.

END_OF_DOCUMENT_TOKEN_TO_BE_REPLACED

Liverpool is the only English club that has won the European Cup (now the Champions League) five times. Courtesy Andy Nugent

A cloud of negativity looms over Anfield these days. Liverpool was once the crown jewel of English soccer – winning trophies and attracting the world’s best talent. Now, the club is in disarray and lacks the passion that once was its calling card.

Liverpool has never won a Premier League title and hasn’t won England’s domestic top flight in 20 years. Dreams of winning a title this year should fly out the window. Even the manager has conceded to only fighting for fourth place and Champions League soccer, rather than for the English Premier League title.

The club’s American owners have been searching for a buyer since April, but anyone with half a brain wouldn’t buy the club for its owners’ asking price. The owners own a mountain of debt almost as high as Manchester United’s, but Sir Alex Ferguson and company seem to be doing all right – and the mountain isn’t getting any smaller.

END_OF_DOCUMENT_TOKEN_TO_BE_REPLACED

Failing to pull any points from Barca cost Atletico a chance to continue its early season success. Currently, los Rojiblancos are in the obligatory late-September, four-way tie for fourth place with Barcelona, among others. Three days from now, Atletico will meet current table topper Valenica, which, even with former talisman David Villa roaming the Camp Nou, has handled its three games with as many victories. While the triumphs came against middling sides Malaga, Racing Santander and Hercules, securing maximum points from these fixtures is key to winning La Liga.
END_OF_DOCUMENT_TOKEN_TO_BE_REPLACED 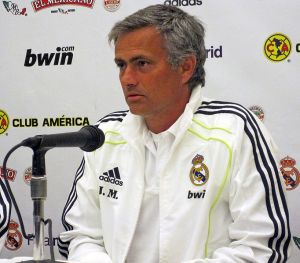 Jose Mourinho took over as manager of Real Madrid days after leading Inter Milan to victor in the Champions League final. The questions of whether or not anyone can be Barcelona and whether or not Mourinho can win anywhere will be answered about nine months from now. (Photo Courtesy: APasciuto)

Visions of Spain captain Iker Casillas proudly brandishing the nation’s first-ever World Cup trophy two months ago are still fresh in the mind of soccer fans around the globe. Surrounding him on the podium were his teammates, including the likes of Barcelona stars David Villa, Gerard Pique, Carles Puyol, Xavi and Andres Iniesta. While the group celebrated the championship together, it all ends once La Liga begins its season.

The stars of los Galacticos and the leaders of l’equip blaugrana don’t have much to celebrate together in most season. Last year, Barca edged out Real Madrid by three points and hopes to win the league for the third consecutive time.

There are, of course, other clubs in the league. But it always comes down Madrid and Barca when the season’s approaches its conclusion.

Unlike last season, Zlatan Ibrahimovic and Thierry Henry won’t be able to help Barca to the title. And Jose Mourinho will be calling the shots in the Spanish capital.
END_OF_DOCUMENT_TOKEN_TO_BE_REPLACED

Bradley Has Some Forward Thinking To Do

The United States Men’s National team had a good thing going for a while. Charlie Davies and Jozy Altidore were set to be the starting forwards while Brian Ching was expected to provide some relief on the bench. If USMNT manager, Bob Bradley, didn’t know how fast things could change, he does now.

The roller coaster, which could describe Bradley’s tenure as manager of the national team, took a steep dive downhill when Davies was severely injured in a fatal car accident on Oct. 13th. The accident left Davies almost crippled, one of the passengers, Ashley J. Roberta, was killed and another passenger was taken to the hospital for treatment after their car struck guardrail.

Lately, there have been rumors about Davies losing his race for fitness with the World Cup just a little more than a month away. Recently, on his twitter, he has been acknowledging words of encouragement, which he is receiving hourly. Davies is now practicing with his club, French side, Sochaux, almost limitless.

END_OF_DOCUMENT_TOKEN_TO_BE_REPLACED

Ah the Transfer Rumors Heat Up

Let’s go over some transfer news shall we? Been a long time since the window has been open, and there is still plenty of time for rumors to come and go, but here are some recent ones that I really have enjoyed.

Riquelme to Leave Boca Juniors? Couldn’t Be. Or Maybe?

"The Maestro" could be leaving his stage for a new one if the rumors are true. (Courtesy July)

There is a lot to this story that makes sense. Corinthians is the biggest club in Brazil and they are on top of their game. Boca Juniors on the other hand is faltering, and Riquelme looks staggered in the Juniors attack. Watching a few matches has given me the impression that the “Maestro” isn’t in the flow of Boca’s game and he isn’t being used as the creator like he should be. He is a supply line with no supply and no line. He could be looking for a move for his own personal success, but that isn’t his way of business.

Riquelme is playing for free next year (imagine that) because he so badly wanted to get out of Spain. Riquelme signed a contract at Juniors that said in his third year he would play for free if he was bought from Villareal. Juniors went through with it and now have a world-class footballer playing on their side for free next season. And they need it because they are struggling financially (like the rest of the AFA) for the first time in a while.

The financial struggles could also be a reason to sell Riquelme to Corinthians–they have a lot of money, and Boca needs money, what could be easier. The money issue is important here because if Boca thinks they can win a title next year with a free superstar than they should try it, but if they can’t and see a move as necessary to open up some space, then they should sell the aging wonder for a good price and pick up their losses.