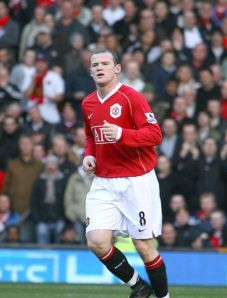 After a turbulent few days regarding his future with Manchester United, striker Wayne Rooney signed a five-year contract extension with the club. (Photo Courtesy AtilaTheHun)

In an affair that’s become more bizarre than anything to hit the English Premier League in recent history, Wayne Rooney is staying with Manchester United. Is this just another example of manager Sir Alex Ferguson getting his way, or is Rooney’s commitment to the club genuine?

Answers to this question and others are far from evident. But is this behavior surprising from someone who has “Just Enough Education to Perform” tattooed on this right forearm?

Regardless of thoughts on anyone’s intelligence – or maybe emotional intelligence would be more appropriate here – the end of this saga should mark the return to brilliant soccer for Man U. Rooney’s alleged beef with the club surrounded its inability to secure enough talent to adequately complement his own. Certainly recent acquisitions Javier Hernandez, Chris Smalling and Bebe don’t exactly refute Rooney’s claim that United is a club in decline.

But from Man U’s perspective, losing Rooney was the Armageddon scenario. Surely with its brand, resources and, of course, Sir Alex, United would survive and remain competitive in the long term. The decision to sell Cristiano Ronaldo to Real Madrid two summers ago for an obscene amount of money was driven by economics and the desire of the Portuguese international to play in his native Iberia.
END_OF_DOCUMENT_TOKEN_TO_BE_REPLACED