The New England Revolution looked to be on the verge of finally sealing the club’s second road win of the season and ending FC Dallas’s 14 game unbeaten streak, and then it all came undone like it has so many times this year. The Revs were able to survive with a 2-0 lead into the 80th minute when Dallas midfielder David Ferreira stepped up to the penalty spot for the second time in the game — he missed the net on his first try earlier in the game– and the Hoops captain banged in a goal for Dallas and brought the team back in the game. A last gasp goal from substitute Jeff Cunningham in stoppage time sealed a, 2-2, draw for Dallas and major blow for New England as the club tried to end its 10 game winless streak on the road.

Joe looked at the struggles Roberto Mancini has had with his squad selection and keeping his high-profile players happy thus far, and things don’t look to be getting any easier for the Italian. Manchester City will have to take on Chelsea this weekened and City have only three healthy defenders going into the game against the most potent offensive squad in the Premier League. Mancini and City have shelled out millions of dollars on some of the biggest names in soccer, but they are missing quality depth in defense and maybe not so many big name stars, but maybe some more quality players who can fill in when the team is in a tight squeeze.

END_OF_DOCUMENT_TOKEN_TO_BE_REPLACED 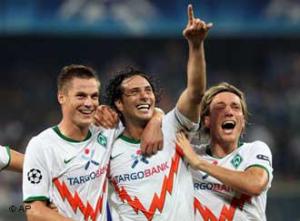 Claudio Pizzaro (center) celebrates with teammates after he scored in the 105th minute against Sampdoria on Tuesday to send Werder Bremen through to the Group Stage of the UEFA Champions League. (Photo Courtesy Deutsche Welle)

Werder Bremen completed massive come back against Sampdoria on Tuesday to earn a bid to the UEFA Champions League Group Stage. After defeating the Italian club 3-1 in the first leg last week, Bremen fell behind 3-0 on Tuesday, which put them behind 4-3 on aggregate. However, a strike in the 93rd minute from Markus Rosenberg tied the clubs 4-4 and sent the match to extra time. In the 105th minute, Claudio Pizzaro scored for Bremen to seal the its place the 32-team group stage.

The Guardian – Robinho refuses to play in Turkey

Brazilian Robinho has turned down contracts Turkish sides Fenerbahce and Besiktas after deciding life in the country was not for him. The forward spent most of the summer embroiled in a struggle to remain with Brazilian side Santos before Manchester City demanded he return from extended loan spell. However, City’s summer spending spree deemed him expendable. After refusing to sign in Turkey, Robinho claimed he prefers to sign with an Italian or Spanish side, as many of his countrymen have succeeded in both nations.
END_OF_DOCUMENT_TOKEN_TO_BE_REPLACED

Arsenal and Tottenham will face-off Saturday at the Emirates Stadium to lay claim to as who is the best club in North London right now. It is a match-up that looks to be a barn burner because the two teams have high octane attacks and sub-par defenses. The game also has implications to set apart the two teams and give themselves room in the top four (Champions League qualification) on the Premier League table.

Both Arsenal and Tootenham have 19 points coming into this weekends match-up and are only set apart by goal differential — Arsenal at a +16, Tottenham at a +9– and Arsenal’s one game in hand. And both need this win to keep pace with table setters Chelsea (who play a Bolton side  they beat 4-0 in a mid-week Carling Cup match), and to avoid being bumped down by a confident Liverpool side who beat Manchester United last week and is playing a stingy Fulham side that looks tired from all the extra competition that the UEFA Cup has brought. And Manchester City and Aston Villa should surely wrap-up at least 1 point this weekend in their competitions keeping them in the hunt for a top four finish and jumping over the loser in North London.

This game is more than just a derby this weekend, it is a match that will make one of these teams a serious contender for Premier League silverware come May.

END_OF_DOCUMENT_TOKEN_TO_BE_REPLACED

Sir Alex has been on the war path lately. He has not been holding his tongue about his true feelings towards referees lately. And maybe the FA should step in, for once. (Courtesy Wikicommons)

Am I the only one confused to as how Sir Alex Ferguson can get away with criticizing referees time and again while other managers in England get suspended for their comments? Sir Alex is going to be penalized for his comments about referee Alan Wiley. At times Sir Alex sounds like a high school student criticizing a referee from the stands during his school’s football game.

The FA (England’s ruling body on all thing football and its rules) clearly states:

“Post-match comments in relation to Match Officials and incidents are still permitted provided they are not personal in their nature, imply bias or attack the integrity of the Officials in charge of the match, or in any other respect bring the game into disrepute.”

Ferguson’s comments seem to fit into this domain. He is brash and at times too critical of the officiating in matches. I wish he would accept that Manchester United will lose games, and when they do, it isn’t always a referee’s fault.

And Ferguson has stepped over the line yet again–even as he is awaiting a ban– after the Liverpool match this past weekend. He has commented yet again on a referee’s missed or controversial calls, and this time shouldn’t expect a ban because the FA will probably lump the two into one ban, and Sir Alex will get off easier than he would if the FA would take the two comments as two separate incidents. Or the FA will ignore the comments.

The FA ignores Sir Alex because football in England isn’t the same if Sir Alex isn’t roaming the sidelines, he is a star, a nemesis and an icon when he is around a game. And the FA doesn’t want to risk not having him there for the publicity.

END_OF_DOCUMENT_TOKEN_TO_BE_REPLACED

Kevin Koczwara is looking at the top competitors for the EPL trophy and picking a winner. His pick is sadly a team he hates. (Courtesy edwin.11 flickr)

I just can’t pick against two time defending champions. Manchester United just has too much depth. Their squad lost a world player of the year, but still have that champion’s swagger, Sir Alex Ferguson, and a bench full of players that could start at just about any club in the world.

The depth is what really seals this pick up for me. No matter how many stones I throw into wishing wells for Liverpool’s first league title in 19 years, I just can’t pick them to take over the top spot. United can play for the FA Cup, Carling Cup, the EPL and Champions League with strong squads for every match with a different starting 11, and not many clubs in the world (other exception being Barcelona) can boast about that.